The Domesday book of 1086 records Chevithorne as being one of the Manors within Tiverton. At this time there was one large parish based around St Peter’s, served – from the 12th century – by three or four priests, each responsible for his own “portion” of the parish. Chevithorne formed part of the Tidcombe Portion. Each priest took services on one Sunday per month but was responsible for the whole of his portion. In time, small chapels were built in the outlying areas.

Unusually, this arrangement of a group of priests serving one parish endured until the late 19th century, when Chevithorne’s history really came to life. William Rayer, the priest for the Tidcombe Portion, who also contributed to the founding of Tiverton Infirmary (now Tiverton Hospital), was responsible for the building of the chapel at Chevithorne, which was completed in 1843. 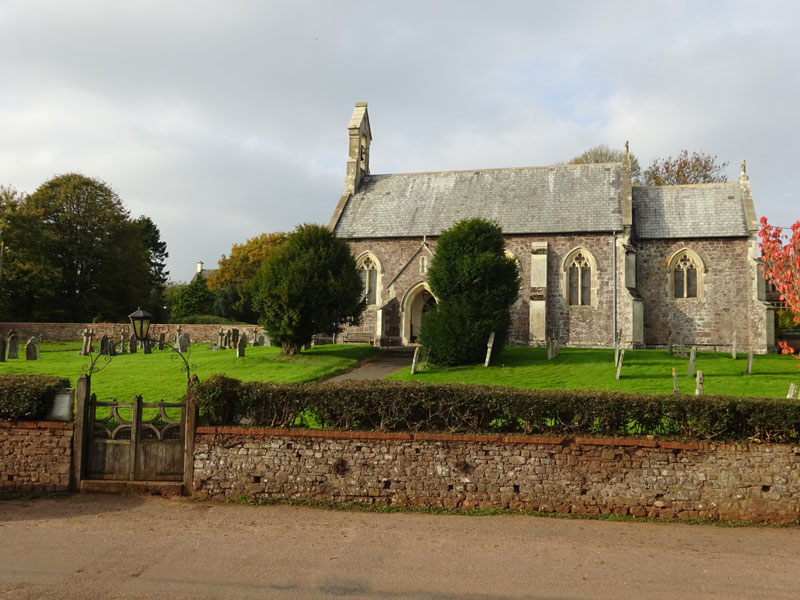 In 1816 John Heathcoat brought his lacemaking business and resulting prosperity to the town and in 1869 his grandson, John Heathcoat Amory, commissioned William Burges to design Knightshayes Court in the ‘muscular Gothic’ style as well as the vicarage at Chevithorne. Both the church and the vicarage behind it (now a private house) are Grade II listed. The church contains a number of memorials to the Heathcoat Amory family and a churchyard memorial to Michael Heathcoat Amory was designed by Eric Gill. The family still remains closely associated with the church.

By act of parliament in 1884, a Rector was installed at St Peter’s and Chevithorne became a separate parish until 1950. It was then reunited with St Peter’s until 1955, when the Rev’d Frank Miles took full charge of Chevithorne with Cove until 1974. After that time, the Exe Valley Team took over until 1994.

At present, the Church of St Thomas the Apostle, Chevithorne, is once again linked with St Peter’s. The two churches now form the benefice of Tiverton St Peter’s and Chevithorne with Cove.